I aspire to Art. I make clothes, though mostly from patterns created by others. Maybe someday I will be an artist who makes wearable art.

In the meantime, I'm working on a label to put in (some of) the clothes I make. The garment I am currently working on is as close as I get to wearable art. It is my first garment since taking Mary Ray's class. Her garments are as beautiful inside as out and include her trademark label. So I thought I'd work a bit on my *chop.*

A while back I took a class with June Colburn entitled "Making Your Own Chop." We were to design a chop, a Japanese signature in block form. Such a signature is seen often in Asian art. Hers was lovely of course, a wonderful stylized version of her name. Mine failed to emerge during class or even afterwards. 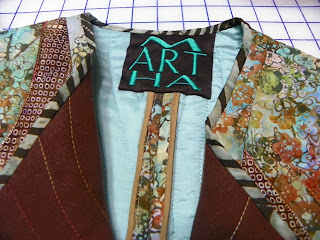 Then this occurred to me. I like that ART is in the middle. I even like that HA is at the end. It's not to be taken too seriously, after all. Then the mountainous M. I rather like that too.
Posted by Martha at 6:07 PM