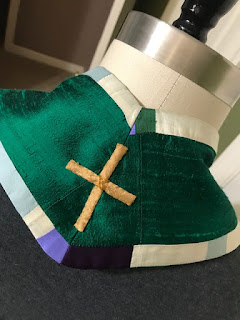 In the Episcopal church, priests and other clergy wear vestments. Vestments also adorn the lectern and the altar, and sometimes other places in the main worship area, the nave. These are heavy in symbolism and can be ornate or quite simple.

Over the years, in various churches, I've made vestments. Some were made with the most exquisite, expensive silk brocades I've ever cut into and others were made with easily available materials, most often silk or wool.

Recently my priest asked me to make a new priest's stole for the church. I am not sure how old the existing stole is but it's very worn and not worth repair at this point. This does not show up in the pictures I have. 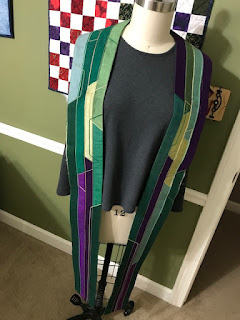 A stole is a shaped scarf of sorts that is worn around the neck of the priest and drapes to about calf length. It should be quite simple to make, right? I took the old one home to trace onto pattern tissue. 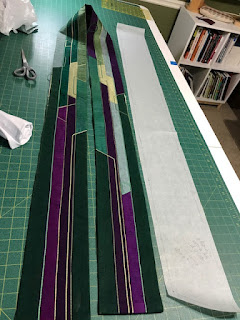 The old one has an interesting back neckline, with a cord inserted on the longer side of the stole to hold it away from the neck. I have no idea if this has meaning or is just a way to keep it away from the body. It looks odd to me. 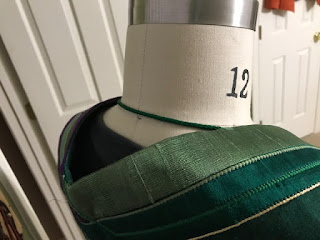 I justified omitting this detail after finding many examples online without it. All the previous stoles I've made were made without this detail. This means that the stole fits snugly to the neck. Other garments are worn next under it, so I'm not terribly worried about this.

Of course, it will be easy to add the cord if my priest wants it. He is easy going and I doubt he'll care one way or the other.

Naturally I made the construction more difficult than necessary. This is entirely my fault, as I took my usual approach to sewing. I just jumped in, making design decisions on the fly. 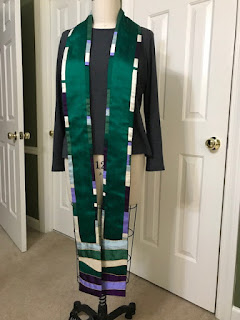 I'm lucky to have quite a nice stash of silks from other projects, remnants from clothes as well as previous sewing for my church. This particular stole must be green. The episcopal church follows a seasonal color scheme in its use of textiles with green the most frequently used color. It is referenced as "ordinary times." Generally this green is almost a clear almost-apple green and I always have trouble finding it. Greens can be quite tricky. There are so many different hues of green and they follow popular trends in other textiles. For a while, only olive greens were available, for example.

I used a variety of green silks in the hopes of avoiding a clash by creating a blended effect. The original stole (and coordinating vestments) included shades of purple too, so I added two shades of purple as well. I'm in high hopes this works!

The process was interesting and actually quite centering for me. I especially enjoyed the design process and my priest gave me total freedom. I also enjoyed adding a little embellishment. 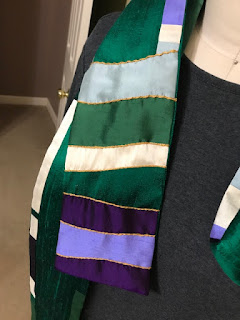 a little embroidery separating these pieces

Our church organizes much activity around four words: welcome, love, nurture and feed. So I enjoyed adding those on the back side. 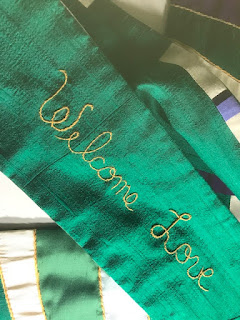 Traditionally the stole has a visible cross on the back neck. I think these are often machine embroidered. After making a few samples, I appliqued a gold silk cross (two bias tubes) and added some silk threads to the center. Ok, ok, I made samples after messing up on the finished stole first! 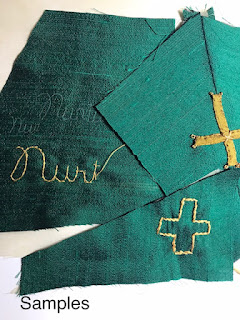 But now I want to make a chasuble to match it. The chasuble is the outer poncho-like garment worn over the stole. The existing one looks quite shabby next to the new stole.

Hmmm...this may be a continuing project.