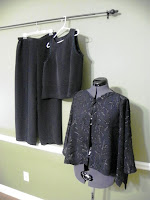 My most recent projects have been quite fussy in terms of fabric choice: black textured sheer that does not like the iron, and black, black four-ply silk that my eyes don't like. But of course I love both pieces. They will be lovely to wear.

Just noticed I took the pictures before removing my basting thread from the armscye of the shell. Oops!

Two of my TNT patterns were used - Hearts A Flutter from Cutting Line designs for the shell, and the Plaza pants pattern from The Sewing Workshop. I'm really glad I was able to use these relatively simple patterns to accommodate these trying fabrics. Both of these were made from the four-ply silk purchased at Mood in NYC by sewing friend Patsy.

The jacket, described in a previous blog, was made from mystery fabric that almost certainly has mostly synthetic fabric. It is a novelty piece and perfect for the incredibly simple jacket designed by Louise Cutting and Linda Lee. It is the High Five from their joint pattern line, Shapes. I used remnants of the above four-ply silk to make a Chinese knot to use as a simple button closure. 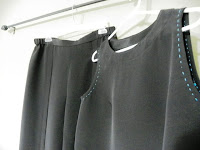 Now I am totally ready to make something from fabric that is neither black nor fragile!
Posted by Martha at 5:53 PM 1 comment:

High Five for the Holidays

My High Five Jacket is almost complete. All that is needed is the right closure. I'll probably go to Gail K to see what is there. Or I might create Chinese ball button out of a solid black silk remnant. It doesn't need much. The fabric is the focus with this garment, I think. 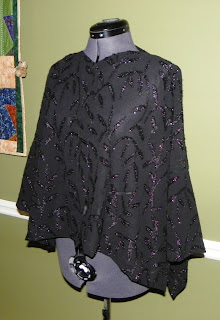 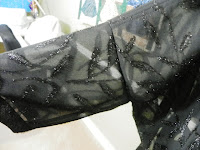 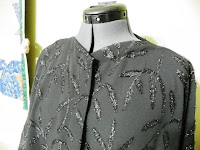 This sheer and textured fabric was purchased on a trip to Toronto to visit DSIL several years ago. She too loves to sew garments. She took me to a small designer workshop where the bolt ends are sold in a small room just off their cutting room. There was a glass window into the cutting room that was fascinating. And we were able to walk through their show room where they have sample garments.

It will be fun to wear during the holiday season.

Happy Thanksgiving to all. May our fiber creations still fit after Thursday.
Posted by Martha at 10:51 AM 1 comment:

As any sewist will attest, pressing does matter. In fact sometimes we press more than we sew. This is definitely true with the Shapes High Five Jacket designed by Louise Cutting and Linda Lee.

The jacket is basically a kimono with a jewel neckline and exaggerated drop-shoulder sleeve seams. It is composed of 5 pieces, approximately rectangular. The edges of the jacket are finished by folding under 0.25 inches, then a full inch, and then they are top-stitched close to the first folded edge. Corners are mitered. Pressing is the key to making all of this finish nicely. I love stuff like this!

A long time ago I learned a keen little trick for pressing a tiny fold without burning fingers. I use an ivory silk organza pressing cloth - it is easy to manipulate, loves the iron and is fairly transparent.

Happy Thanksgiving to those of us in the states. And happy holidays to all.
Posted by Martha at 5:02 PM 1 comment: 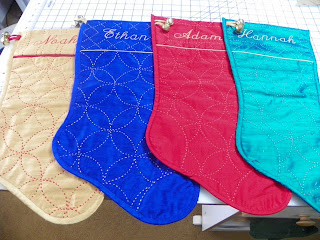 A new member of our clan arrived in June - Noah. Here is his recently completed stocking alongside his older siblings' stockings. It's satisfying to welcome this new cheerful little boy with a small tradition.

Following Nancy Shriber's technique for sashiko, I used silk dupioni with cotton flannel backing. The stitching is done from the back following a traced pattern. This time I used a red cotton thread similar to DMC pearl cotton.  It is lined with an interfaced quilt cotton, and trimmed with piping from another piece of silk dupioni.

It was another zen moment with sashiko. I hope to spend much of this season with needle and thread in hand. Maybe some silk sashiko amulets as gifts?
Posted by Martha at 5:59 PM 1 comment: 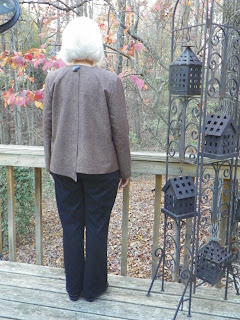 My version of the Cutting Line Design "A Cute Angle" Jacket is more-or-less complete now.

The fashion fabric is a silk matka, probably from fabric.com. A generous sewing friend was cleaning out her sewing room and offered this for free. It was a little challenging to sew but I do like the color scheme and I think it is a good fit with this pattern. The lining is an inexpensive China silk from Vogue fabrics. 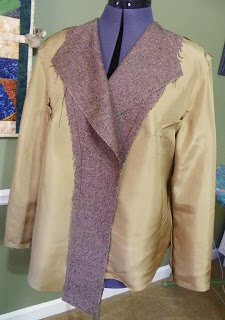 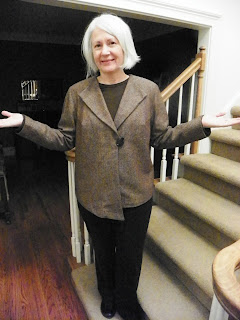 But I do love this pattern - 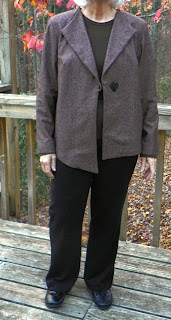 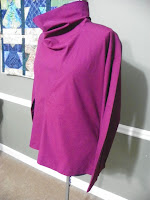 Well, these are probably gussets, but I like the word godet better.

Thanks to a suggestion from Terri K and help from my sewing sista's at ASG retreat this past weekend, my Stella top is finally finished and even wearable. I started this a while back, very soon after TWS issued this new pattern. My first attempt led to some frustration as the hips were entirely too tight. I probably should have made a muslin, but maybe I would not have added the gussets. And I like the gussets.

In order to insert gussets, I opened up the side seams (which had been serged). Then I tried on the top to see how far they wanted to gape at the hip. This gave me a fair idea how big the gussets needed to be. Then I cut two rectangles of fabric on the bias and slipped them under the openings in the side. Next I just top-stitched them in place.

June at retreat was able to see that one gusset looked pretty good and the other was wonky. Wonky in a bad way. So I removed the wonky piece, placed that rectangle over the good gusset, and traced the correct placement with chalk. Then I just slipped the wonky gusset back under the opening at the hip, aligning the chalk marks with the seams and top-stitched it back on. This process took lots of careful pressing along the way, but that's the gist of it.

Friends at the retreat pointed out that the gussets actually mimic the neckline on this top and so the gussets are a nice design detail. Of course, I worried that the gussets would simply scream "My hips are too big so I had to add some fabric here." But I don't think that happened in the end.

It is still a bit funky. You can see that in the gallery pieces at TSW web site. The grain line on the front of the shirt is just slightly on the bias, but I'm sure it is intentional. This gives the shirt a little kick at the front and (with my bias gussets) at the side. I think I like it.
Posted by Martha at 6:41 AM 4 comments:

This past weekend Pam Howard once again gave an excellent class on knits for ASG Atlanta. I started a pair of the Christine Jonson Travel Trio I pants - a pattern I've used four times now. I sewed some and left totally inspired by her garments, techniques and enthusiasm. Thanks, Pam!

This week, I finished the pants and a matching top from the same pattern out of a ponte knit I purchased at Mary Jo's in Gastonia, NC. It is very soft and easy to work with. And I loved using Pam's technique for finishing seam edges, though of course no finish is really needed with these knits. It does produce some nice top-stitching on the outside. I think that one of reasons Pam's garments are so nice is the fabulous top-stitching she does. That's not the only reason, but it is one.

After the pants and top from ponte, I decided to take advantage of the new ballpoint needle to make a couple more knit garments. Knits are quick and mostly satisfying. The next project was another top, this time in slinky or ITY. I don't know the difference between them. I should google that...

That particular top looks cute, I think, but I really don't like working with the fabric. I always get lured into buying it because the colors are so great. Then it slips and slides and I don't end up wearing the garments much. I guess I really do love wearing all-natural fibers more. I must remember that the next time a slinky or other poly knit hooks a finger in my direction.

The final project in my knits binge was the Travel Trio I wrap jacket. I read Robin Denning's PR review and noted that she had to remove some of the bulk in the front. I too found that to be the case and may cut some off both sides. This will eliminate the asymmetric aspect but I think I'll like it better with less bulk around my middle. 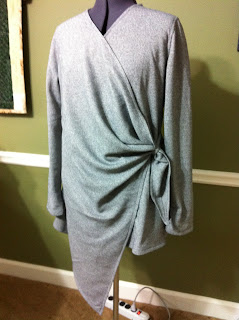 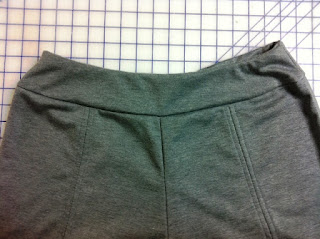 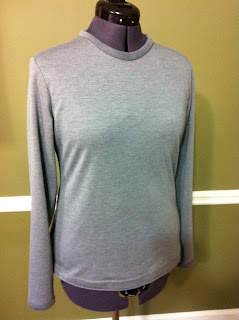 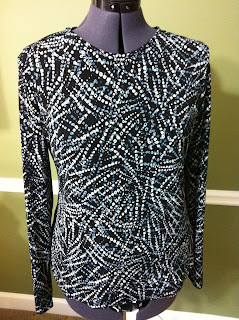