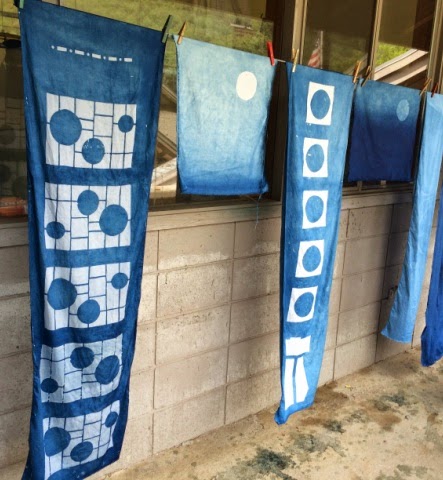 My class at Arrowmont with Roland Ricketts is over and I want to remember it all. It was a dear week with many opportunities to learn. I have recorded some images here to help me remember, and perhaps repeat the steps on my own.

The pieces at right are some of my final ones. All used the rice paste resist to create pattern. Two show my attempt to copy Roland's gradiant techniques with one small circular resist.

This shows where we hung our pieces to dry after the final dip in the vat and an over-night soak to clean off unwanted plant material.

There is still much to do to render these useful. 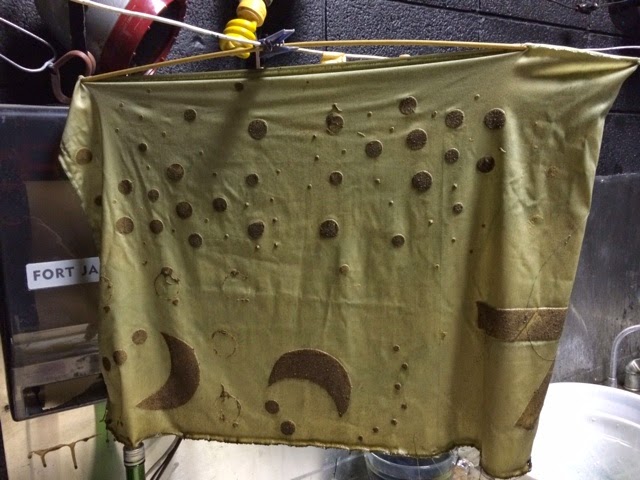 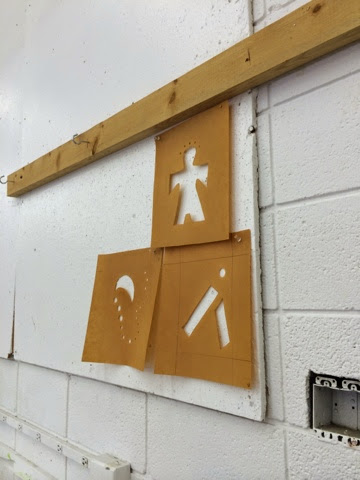 Primitive easy stencils I carved and punched. I really like that part. 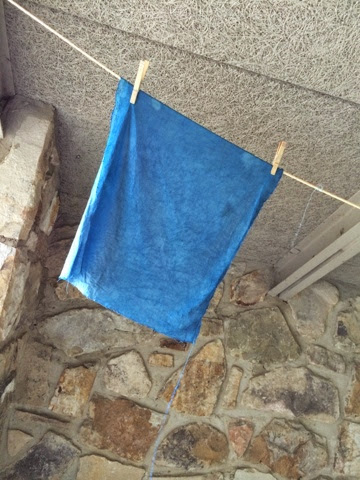 City-wide Couture (CWC), a wonderful sewing group of inspired and inspiring sewists, has issued a challenge. And I love a challenge. The challenge is to create an organized, coordinated set of clothing. This might be called a 6PAC, as it is on Artisan's Square, but in this case, it is called a SWAP - Sewing With A Plan.

The 6PAC comes to mind because it is the one and only time that I actually - sort of - pulled such an organized set of sewing all together. I gathered fabrics, selected patterns, and sewed as planned. B.O.R.I.N.G. I much prefer to sew as the spirit moves me. Now I did love seeing the other 6PACs. Those were great fun to view.

Notably, though my 6PAC was successful in some ways, I never enjoyed wearing the pieces. The 6PAC I chose resulted in clothes that worked together but did not make my heart sing.

The CWC SWAP is fairly simple - 5 pieces by late fall. Not many rules, just that the pieces need to mix and match. After much thought, I believe that the best path for me is a modified SWAP. In my SWAP world, I make one garment after another that makes my heart sing.

So what makes it a SWAP, you might ask?

Well, I've added my own little personal challenge. Each garment must coordinate with the NEXT,  I mean, LAST garment. Sort of a linked list. Or serial monogamy.

While I love the idea of the pretty story board with fabric swatches attached and patterns neatly listed, it just is not going to work for me unless I force it. And if I force it, well, no singing heart.

And I've decided to use stash fabrics, another minor twist to the SWAP.

So here is garment 1: 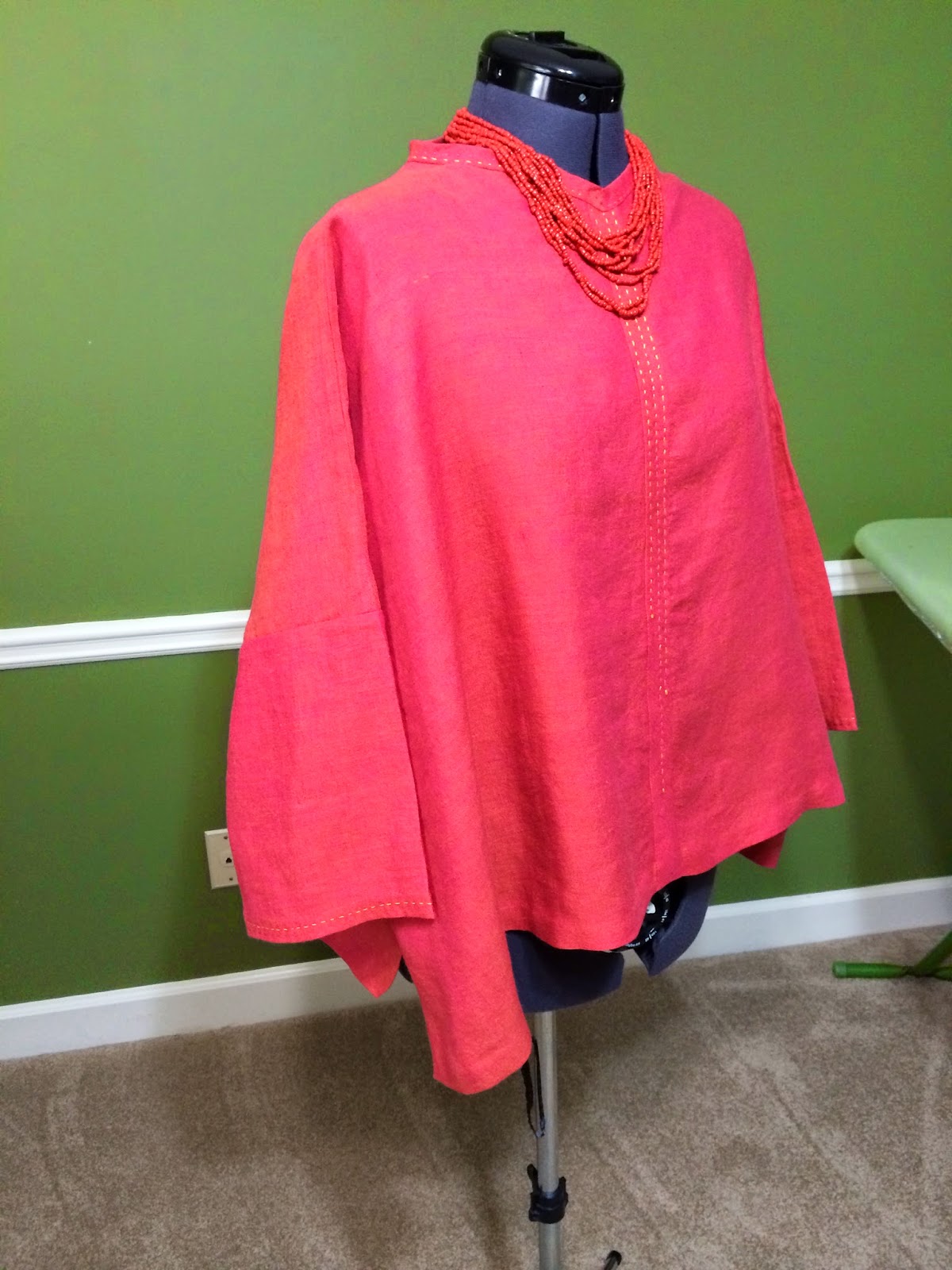 It is the High Five jacket from the Shapes line of patterns, made as a pull-over. The fabric is a light-weight shot linen, hot pink in one direction and yellow in the other. I added some yellow sashiko to warm it up a bit.

And I'm trying these pants out for garment 2: 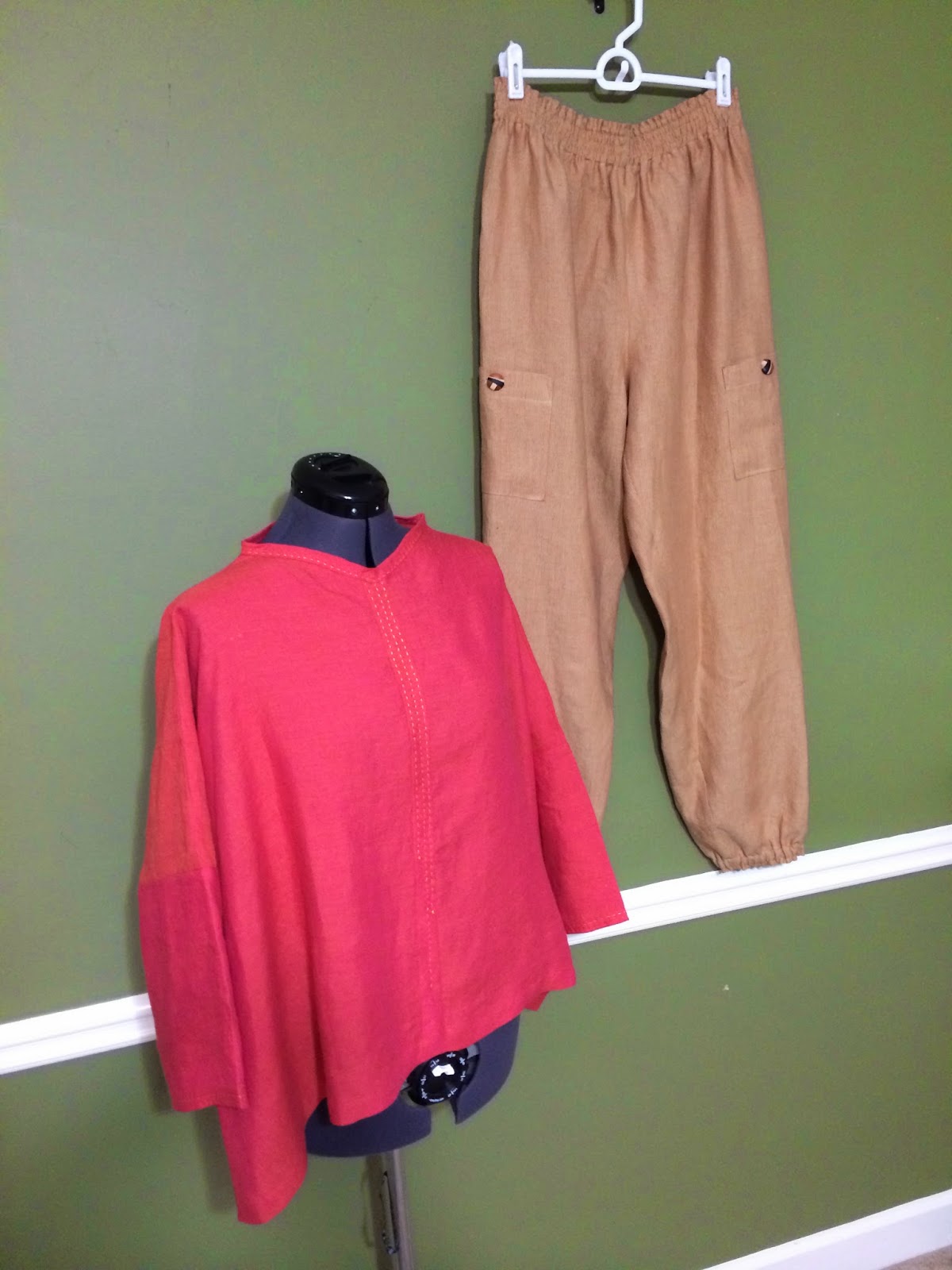 Not too sure if these really work together, color-wise. What do you think?

I do love each piece. The pants are Cutting Line Design one-seams with added pockets and elastic gathering at the hem, also linen but a medium weight. This linen has a subtle stripe that may have taken the color tones too warm to wear with the cooler colors in the top.

Now I'm looking at tops that work with these pants to continue my linked list. A yummy chocolate brown top would be pretty maybe. But first I'm off to spend a week learning about indigo dyeing. So maybe my SWAP will be replanned around that! 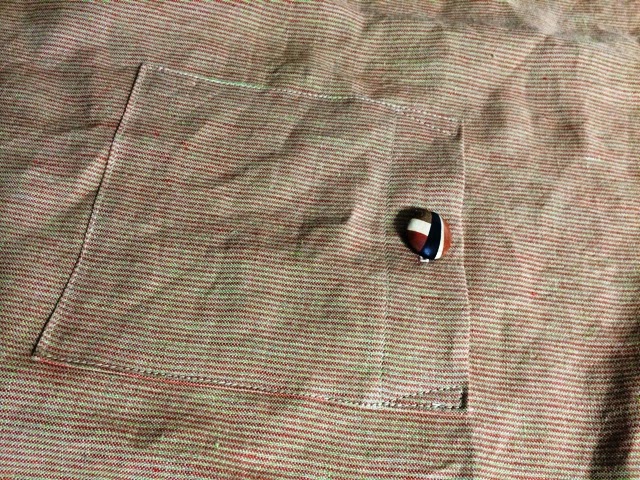 Does planning to sew make your heart sing? 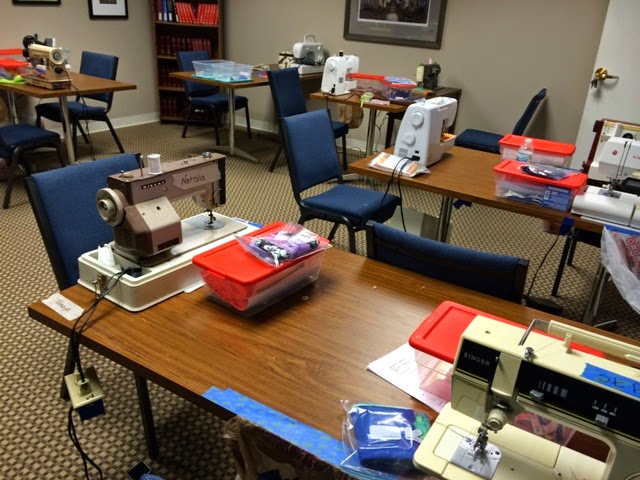 Camp Sew N Sew continues for the 6th year. This year, there was a new twist. We had two weeks - one for girls living in a temporary home near my church, and one for the youth at my church.

Each day the workrooms started out sort of like the picture at left. We had lots of borrowed sewing machines and kits for everyone.


During the first week, we made pillow cases, make-up bags, wallets, portfolio covers, and totes. During week 2, we had one beginners class making similar items.

We also had an *advanced* class during week 2. Three of the girls were returning for their 6th year and so their skills are coming along nicely. Each selected her own pattern and fabric.

Here are some of the items made:

During the last week of Me-Made-May 2014, I found myself repeating myself. 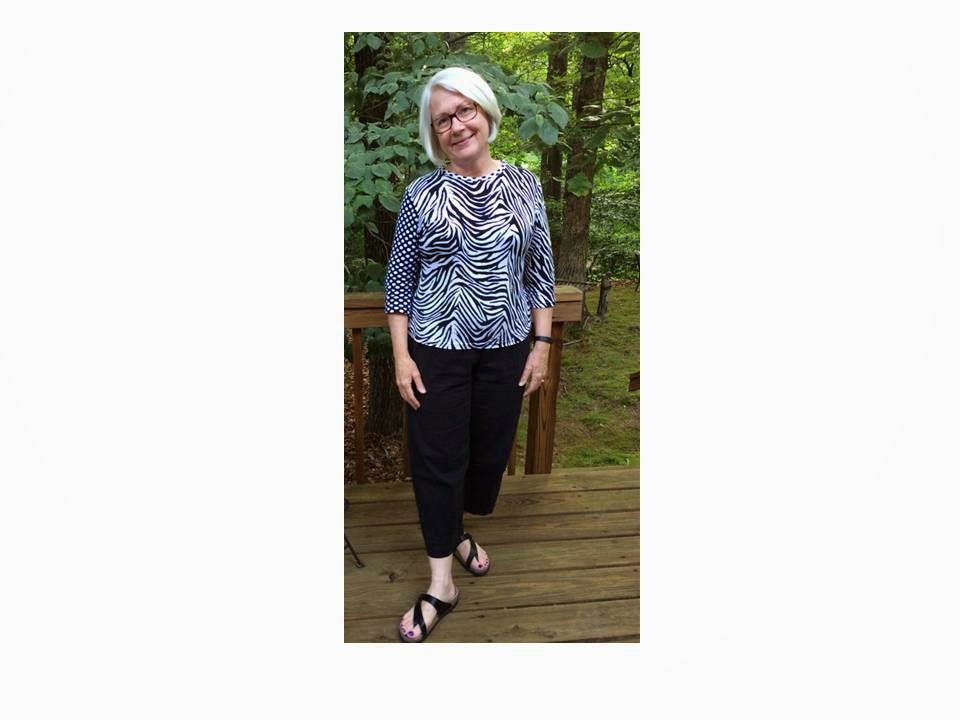 Day 25: Top is Cutting Line Designs Anything But Ordinary in silk noil; skirt is from Decades of Style pattern line 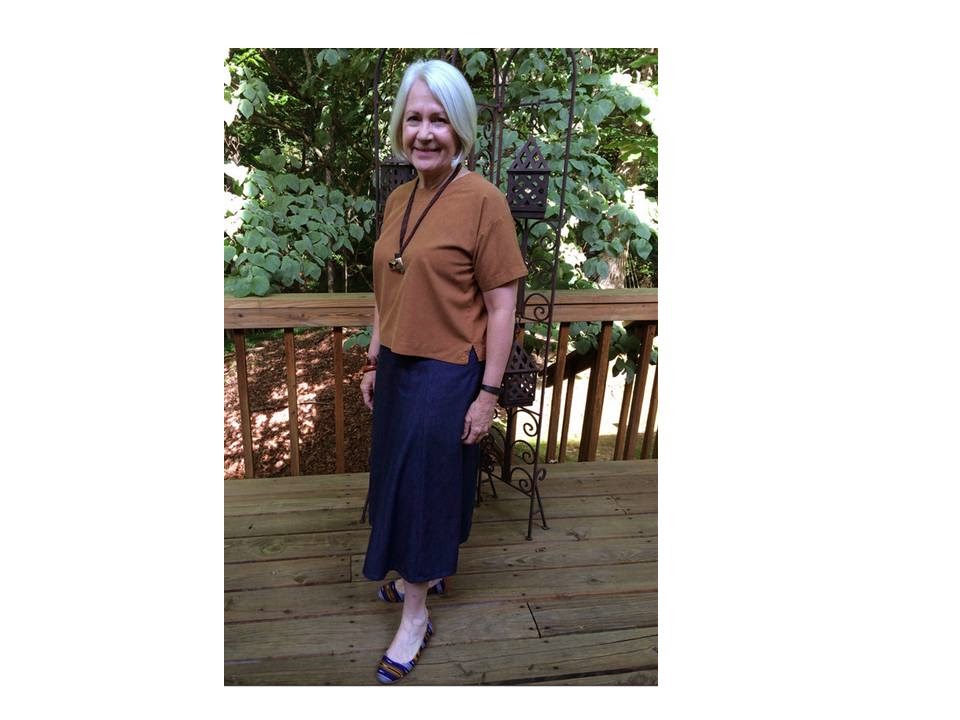 Day 26: Butterick 5891 top made in linens from Sawyer Brook; Pants are one-seams from Cutting Line Designs in silk crepe. 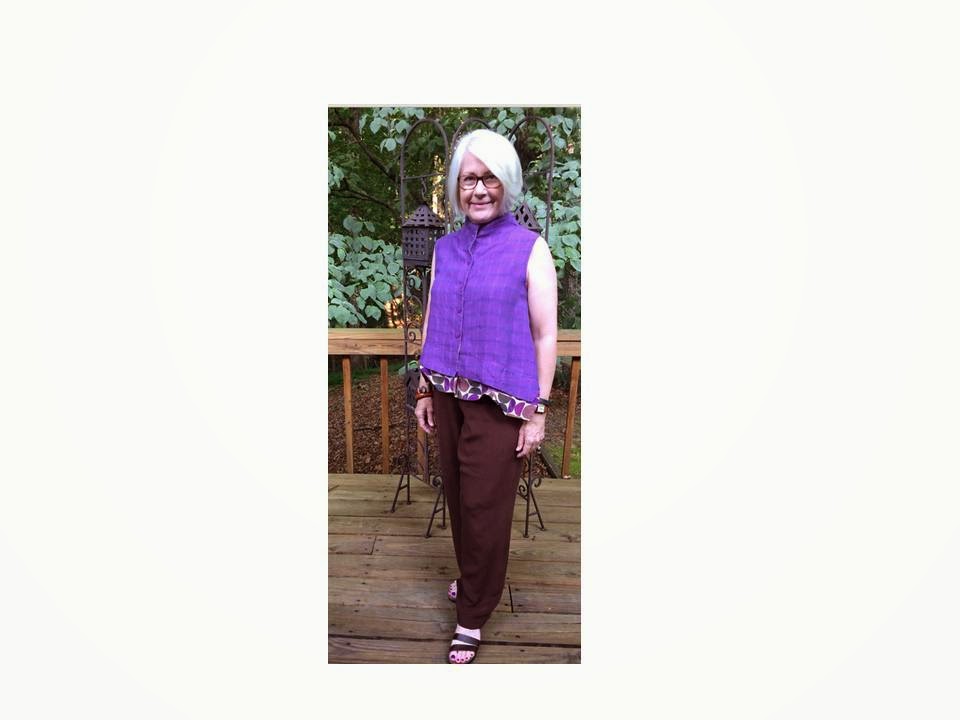 Day 27: Very old pieces from Sewing Workshop. Top is trio top and pants are from the Urban pattern. Both are made in cotton sateen from Gail K. 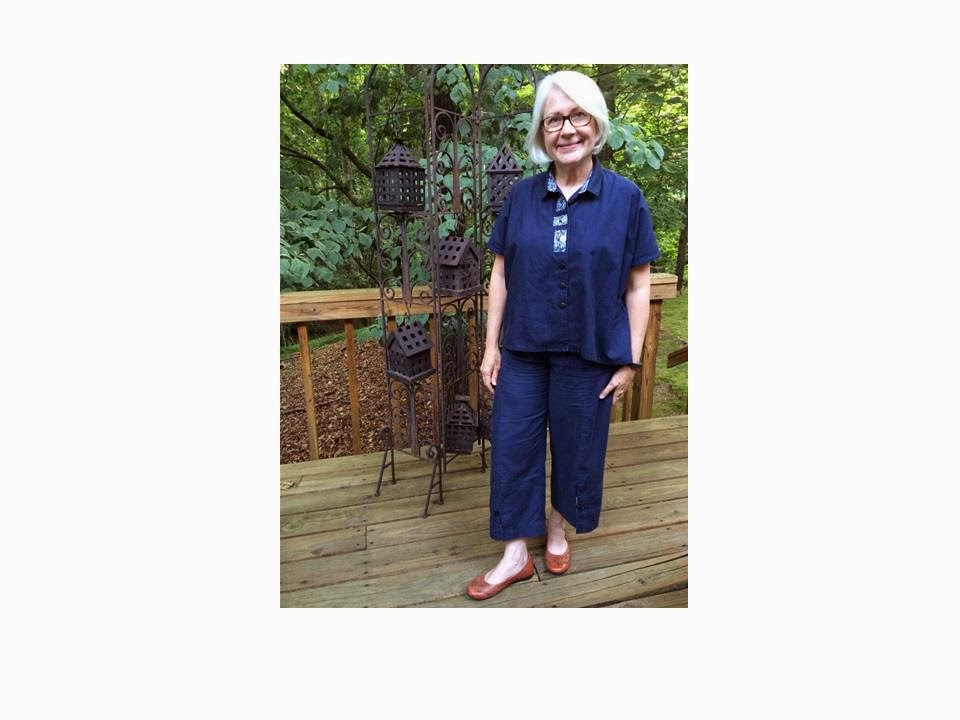 Day 28: Both pieces are from older Sewing Workshop patterns. Top is a blend of the Liberty shirt and the double collar from the Zen shirt, made with a cotton shot in shirt weight. Pants are once again Urban pants in linen. 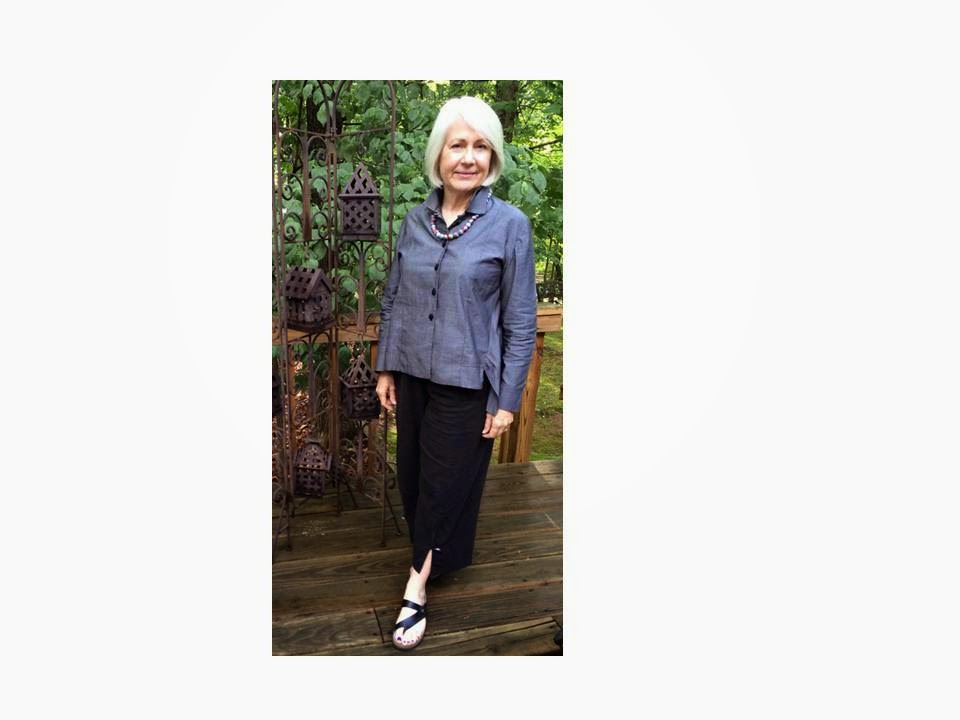 Day 29: More from the Tilton sisters, this one a dress pattern from Vogue in a linen/rayon blend.

Day 30: Another dress from Marcy Tilton (Vogue patterns), made in 2013, with an interesting print in cotton sateen. 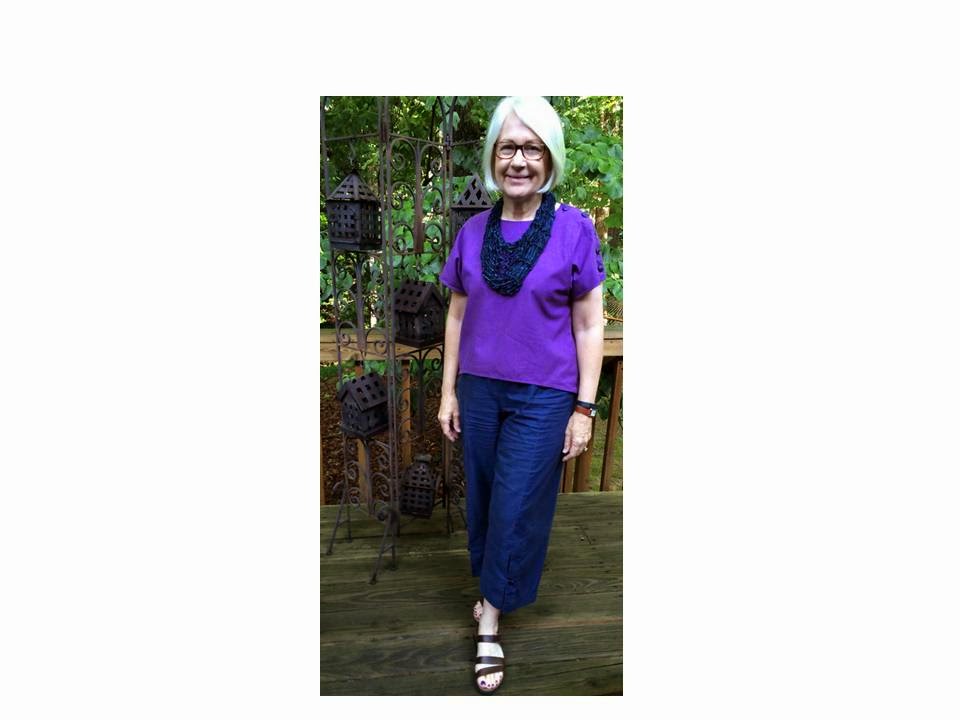