Vogue 9171 is a relatively recent pattern developed by Marcy Tilton for Vogue. This signature tunic style seems to be very current now from my vantage point. This one has several interesting style features.

Marcy's silhouette is often one with a lantern shape, perhaps not the best on a quasi-pear shaped person like me. I tend to fall between pear-shaped and straight-up-and-down. I have convinced myself that these tunics work as long as I pair them with narrow leg pants or leggings.

Having said that, making these Marcy Tilton patterns with puzzler pockets are enough fun that I almost don't mind if it stays in the closet. But it won't.

This particular pattern came to my attention when I met someone (Hi, Mary of Tennessee!) at the Atlanta ACC show wearing it. She looked great in it, pairing it with leggings. She mentioned making changes to it. Now I wish I had made a note of her changes. 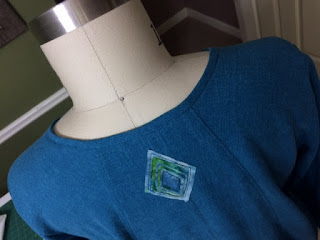 I made a few changes and some were intentional. My first one was not. I had several clues. The pattern only lists fabric requirements for 60" wide fabric. Mine was 45 and I had no problem cutting it out. Also it called for about a yard more than I used in cutting it out. There was a *missing* grainline on pattern piece 14. And there were all these circles lined up on one edge of piece 1 and also on piece 14. 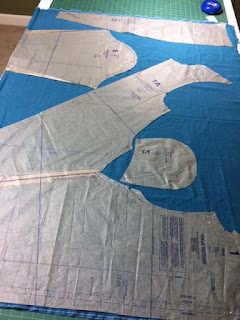 These things did not register until I had cut out the brown and began to read the instructions. That's when I discovered that pieces 1 and 14 were to be taped together and cut as one. I decided to go ahead and make it because my cotton sateen was not terribly expensive. Also the overlap provided for taping was about a seam allowance in each case.

The result is that the side backs are off grain by quite a bit. But I'm not terribly upset. I still like this pattern as well as my result. 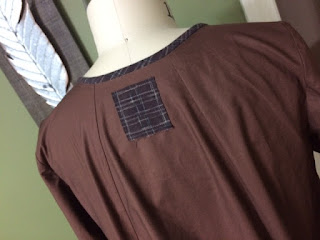 Still I was curious about the effects of the grain and so I made another one in blue Brussels washer. This time I cut it out correctly. Note that it would be fine to cut pieces 1 and 14 out separately as long as 14 is cut on the correct grain. 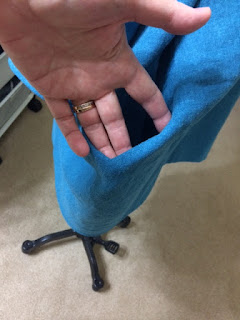 These pockets are so much fun to make. Of course, all the markings and instructions make it easy to assemble. The folds are magically constructed. 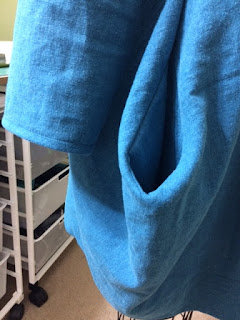 I made a few other changes deliberately: I narrowed the sleeves to eliminate the gathering at the hem. I raised the neckline by about an inch in front. I know from experience that Marcy's necklines are often too low for me. 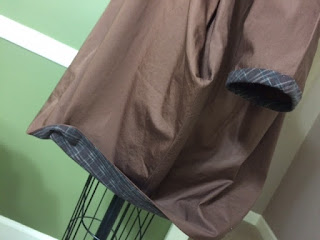 Two of these tunics may be enough for now, but it is a super cute pattern and such great fun to make, so I highly recommend it. In each case, I'll enjoy wearing a necklace or scarf with it, as it is a kind-of blank canvas. This one by Marcy almost has me cutting out a third one. 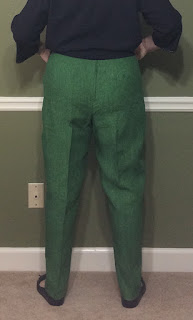 I've made two now and I'm convinced these are great fitting pants. The Eureka Pattern envelope contains pants to trace based on your dimensions and one of three butt shapes. I was lucky to have Rae Cumbie fit me at the Atlanta Expo, so she selected the size and the appropriate butt shape. And she pinned until they were right and made notes on further changes. There was no guesswork for me. I made the mods she prescribed, changing only the length. They are just right. I think.

I fussed and fumed over the white pants. They are not slimming. I ended up taking them in and shortening them. But they were probably fine before that. The fabric is a soft denim, easy to sew and comfy to wear. I finished the waistline with a narrow, straight-of-grain binding. 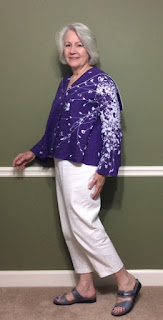 Next I made a pair from this yummy cross-dyed linen from The Sewing Workshop. I just love this version of green. 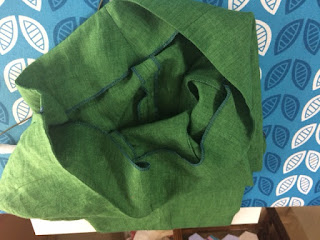 I chose to add a facing to these. I added the facings before seaming the side seams. This gave me an easier way to adjust the width. As it happens, there were just right the first time! Now, that's a great fitting pair of pants.

The pattern describes many variations in waist finish, as well as placement of the zipper. I am quite fond of a conventional lapped seam in the center back and so used that for both pair. I can see using a fly front for some future pants.

It can be such a challenge to fit. I find that this is especially true when you keep hoping you will look much slimmer than you actually are. I'd rather make a fantastically slenderizing pair of pants than eat less. I'd rather try one pattern after another before giving up sweets. Am I in denial? Maybe I have body image issues? Yes and yes. 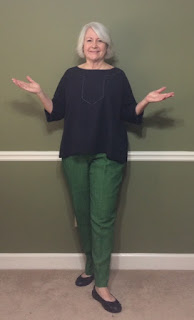 On the other hand, I recently watched an inspiring documentary called Embrace. I recommend it (here is the trailer). We all know that the culture tells us we are not enough. And we all know that is false. So why do so many women hate their bodies? I'm working on this. That's why I put the picture of my backside first. I can do this, yes, I can! 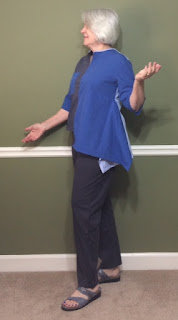 Or is it the Zany top? That's the expressed preference for spell-checker. I'm not sure how to assess it just yet, so maybe Zany is good. 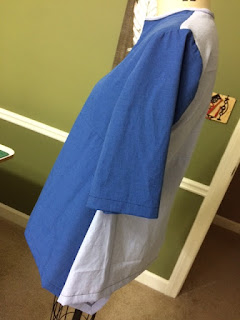 Patterns from the Sewing Workshop are always fun to use. They are carefully drafted and the illustrated instructions are spot-on. This one has an interesting Y seam that forms the left hand side drape. It had me scratching my head initially, but a careful reading led to good results. 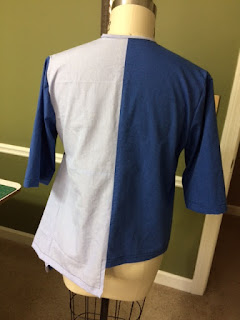 Before the-trip-that-was-not, I had cut it out. I used pieces from recycled men's shirts, creating a color-blocked version. This is essentially a muslin/toile. The color blocking is helpful in a muslin, I think. It highlights the architecture of an unusual piece like this one. 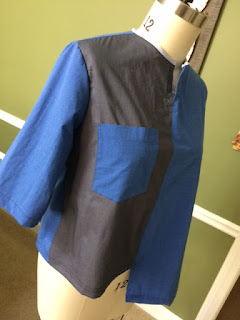 I made three changes. The pattern calls for a key-hole opening in the back seam. I created a front opening instead. I also lengthened the sleeves about 2 inches. Lastly I added a pocket just because the men's shirt had one that I had previously harvested. 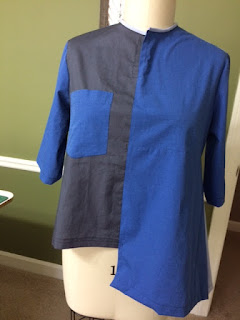 I had my doubts about this one from the get-go. It's not a bad pattern or even a bad look. But I don't think it's a good look on me. It seems a bit young. Or maybe it's the asymmetry. I often like asymmetry but I feel lop-sided this time. 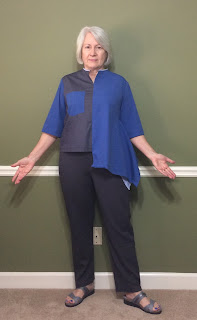 I am still assessing it. I *think* I might like it better if I added the drape to both sides. The fit is great through the shoulders and bust line so I am tempted to make it again. 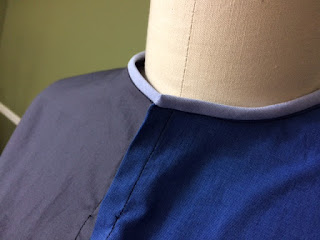 I hope to see other versions of this shirt on the Internet. I see that there are new versions on the Sewing Workshop website and I love the rust orange that Linda Lee is modeling. It's fun to see different ways to interpret a pattern.

So what is your take on the Zayn shirt?

I am growing to love the Memphis dress, another new Sewing Workshop pattern. I wore it for the first time over the weekend. I felt wonderful in it.

(Trying to) Go With the Flow


Twenty-four hours ago, I was scrambling to get things together to leave for a terrific trip to Iceland, followed by several days in Paris, and then a sweet visit to my son and his family in New England. I had all my hand-sewing ready to go. 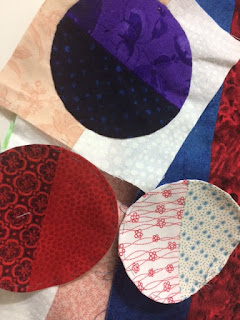 Today, after a long day in the airport, I am at home, letting go of my expectations and returning to life-as-normal.

A little weather (can you hear the hail in the video?) and a too-tight schedule caused our best-laid-plans to unravel. And guess what? It's OK. Sure, we lost some money. And our luggage has not surfaced. And it contains my only clean underwear. But in the end, we have more than we deserve and there will be another trip, another time(*).


So for now, I'll be stitching along. I have a pair of pants to fit! 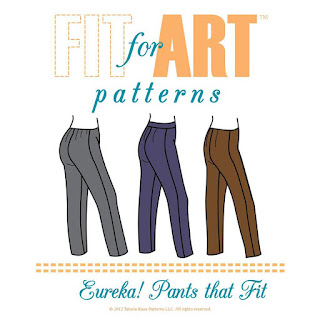 From time to time, a previous make needs repairs or just changes. I consider that great fun.


According to my label, I made this quilt - *Many Moons* - a decade ago. It was a long-term project for travel. I cut out 3 inch circles from freezer paper and ironed it on cotton batik. Then I basted the batik fabric around the perimeter of the paper circle. Lastly I hand-appliqued it to 4 inch square backgrounds of varying batiks. It was very portable. For the large motif I appliqued varying sizes of circles together. After piecing it together, I quilted it with the machine, stitching in the ditch. I finished it with batik bias binding. 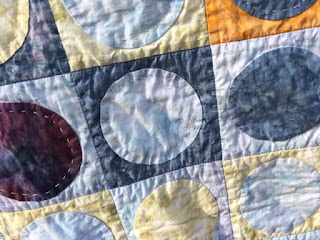 It mostly hangs on the wall, being too small to use for warmth. Recently I took it down and washed it. Afterwards I realized that it needed more quilting. What a fine opportunity for hand work! You can see in the picture above that I used sashiko stitching to stitch about 1/4 inch inside the circles. Some are not yet stitched. I really like the hand-stitch look, and of course, it is relaxing to stitch this way. 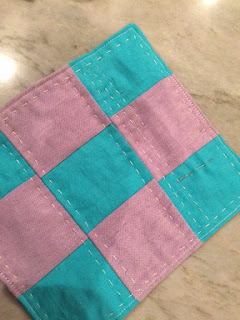 A couple of days ago, my granddaughter wanted to sew something, anything.  So we made a tiny quilt, really just a quilt block. We stacked created the three layers by stacking a solid piece on either side of the nine patch. Then we turned it inside out, and (I) hand-stitched it together. I added just a bit of hand-quilting after granddaughter lost interest.

I'm always the last one to give up on a coloring project too.
Posted by Martha at 6:21 PM 2 comments: