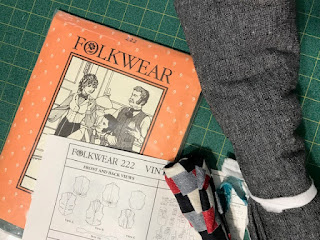 As a grandma of 11, I have sewn items for all the grands - one quilt each plus the occasional PJ pants and other items. That activity has dropped away as they've grown older and more aware of their own styles and wishes. I used to go nuts around the holidays, trying to make something special for each one. Now I'm a bit more selective.

The youngest grandson just had his 6th birthday and made a special request - a Paw Patrol shirt. How could I refuse? The only down side is that I had to buy that fabric from the big box store that I do not like. They have exclusive licensing to fabrics of that sort. It was not too painful, though. 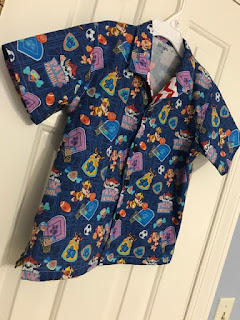 For children's clothes, I have an nice collection of Ottobre magazines. When the grands were coming fast and furious, I invested in subscriptions for several years and kept them. 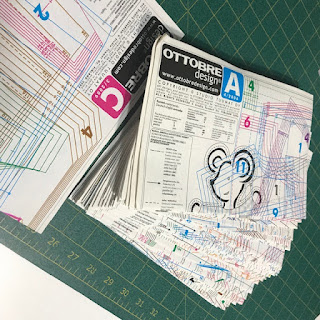 I'm glad I did. I also kept some of the pattern tissues cut out for an older cousin of approximately the same age, allowing me to make an educated guess as to the size for this 6 year old. 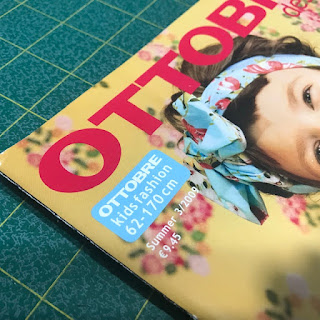 One time, I made a grandboy a darling plaid shirt in his team's colors complete with plackets, collar, collar band. He outgrew it in about 10 minutes. That made me sad. I wanted to avoid that this time so aimed a little larger than needed.

These Ottobre patterns are a good starting place for me. The instructions are extremely brief and they sometimes employ non-traditional construction. I chose a sort-of camp shirt, thinking to avoid all the messy (but fun) details of a dress shirt. 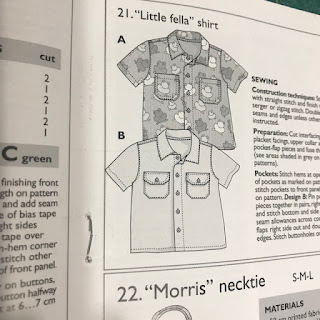 For this shirt, the raw edges between the collar and the body of the shirt were to be covered with a bias binding. I knew I would not like that for a camp shirt because the neckline is kept open, so the binding would show, as would the wrong side of this printed fabric. 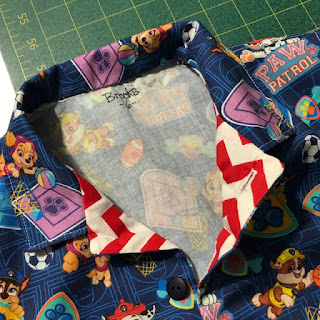 I pulled out one of my husband's guayabera shirts, a lovely silk twill camp shirt. Based on this shirt, I drafted a front facing to enclose the raw edge where the collar is sewn to the shirt. In the back, I was able to enclose all the raw edges by rolling the outer collar edge under and slip stitching it in place. That probably makes no sense, but it worked! 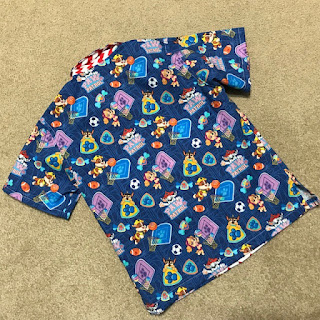 And the shirt is too big. That is a win! Perhaps he will still be able to wear it when the weather once again returns to spring-summer. I think he looks adorable in it! 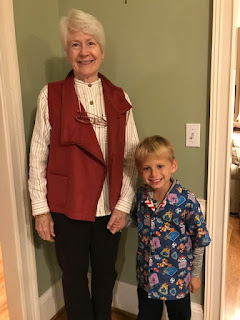 At the same time, I had been visiting with my local grandgirl who was planning a Halloween party with friends around the pirate theme. She had a vision of the costume she wanted to create and began to shop the thrift stores for a vest. She is quite petite and that proved futile. So, of course, grandma to the rescue. And I had just the right pattern, one that I had never opened. I don't remember buying it even - might have been something someone gave me. It is one of those classic Folkwear patterns. 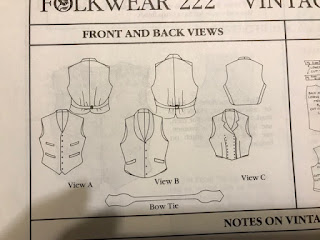 Even though she is local - only a mile away from me - I worried the whole time I was making it that it would not fit. Her mother is also petite and I never had much luck making fitted garments for her due to the need to shorten the torsos of everything. This pattern was just right without those kinds of adjustments. Hooray! 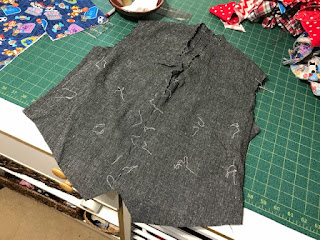 From my stash, she selected the outer fabric and the lining. I did not have enough of the print lining but was able to squeeze two fronts from it. This vest traditionally has a back constructed of two layers of lining, but that wasn't the pirate look she was seeking. 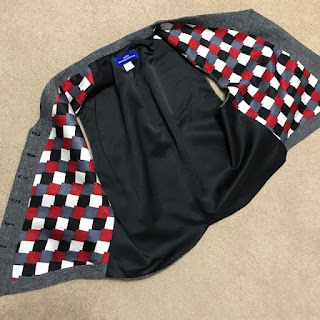 I basted the shoulders and side seams together and ran over to her house. It was so tiny I could not imagine that it was right even though I had taken careful measurements. But it was very close. I had to let out the back and the side seams at the bustline. I also needed to scoop out the armscye but otherwise it was just right. 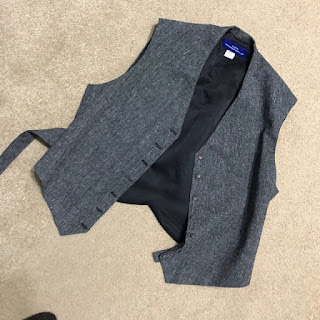 This basting led me to screw up the actual sewing of the vest. I came home and made all the adjustments I noted above, and then made duplicate adjustments to the vest lining. That's when I actually consulted the instructions. Oops. The lining was supposed to be attached to the vest while the side seams were still open. My fabric was fraying a bit and I did not dare take it apart again. 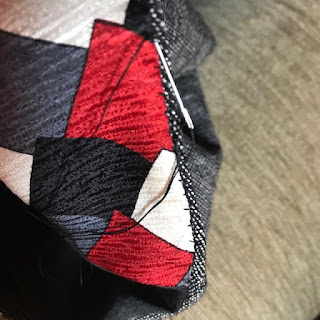 Instead, I attached the lining to the vest all around the outer edge (hemline, center front seams, neckline), leaving an opening for turning on the back hem. I carefully stay-stitched the armholes for both the lining and the vest and trimmed the SAs down to about 1/4-3/8". Then I rolled both SAs to the inside and slip-stitched them together. All good! 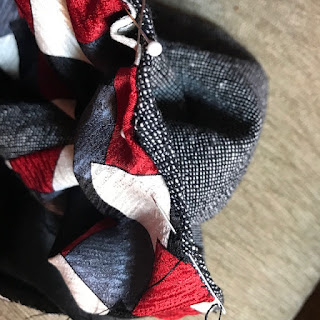 Then I realized I had omitted the back belt. Dang! Sometimes I just need to slow down but Halloween was looming. To fix that I partially opened the side-seams and slipped the ends into the seam, restitching securely. Whew. 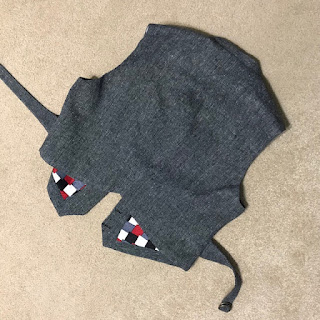 The vest pattern includes 4 welt pockets, each big enough for a quarter. I marked these with tailors tacks and pondered whether to make them, or maybe just the pocket flaps. In the end I omitted them and I'm glad I did. No need to press my already frazzled luck, really. And welt pockets are dicey in the best of times for me. 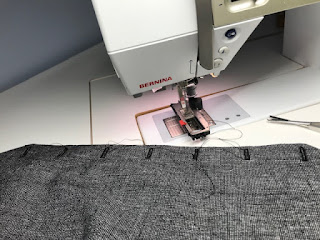 Making 7 perfect buttonholes reminded me how much I love my now old Bernina machine. It really came through for me. I returned to the big box and bought D rings for the back belt and the vest was complete. 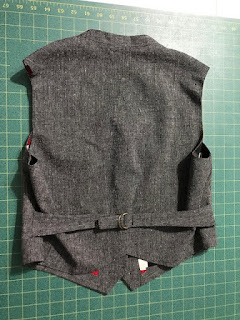 And it fits her perfectly. She says she'll wear it in the future too. She looks adorable in it. I am maybe a little biased but not much. 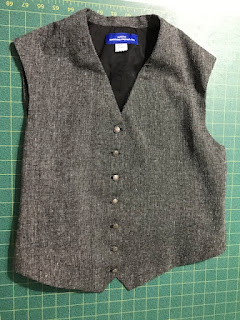 This Victorian pattern from Folkwear was gratifying to sew. It made me wonder if I would wear a fitted vest like this one. Nah. 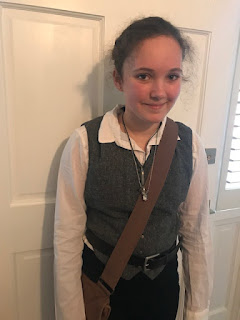 But these makes were very satisfying. 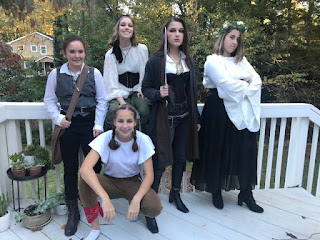