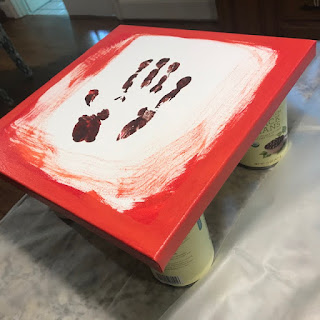 Southeast Fiber Arts Alliance (SEFAA) here in Atlanta hosts a Square Foot Challenge each spring. I've missed some years but do like to participate when I can. It's such great fun to see what everyone makes. The invitation is open to all comers, so no stress. It must be no more than 12 x 12 x 12 inches in size and use fiber in some fashion. They also need to be able to attach it to the wall with push pins. 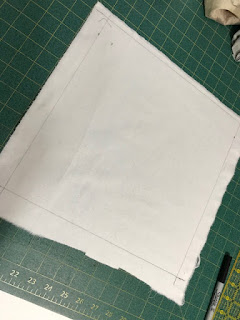 This year they offered free silk kimono remnants to anyone who was willing to make a sq ft piece using those items. Of course, I signed up! A few weeks later a little package arrived with the remnants. Here is what I received: 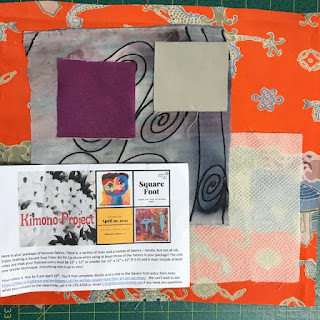 Just like every time I work from a challenge, I panicked. What on earth would I do with these mostly fragile pieces of kimono? OK, maybe not no-stress. 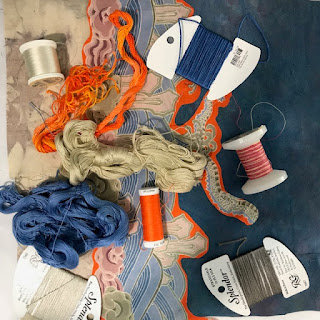 It is good to be constrained. I know that. And they were flexible enough to allow us to use our own fabrics, just as long as at least 3 of their pieces showed up in the final piece. 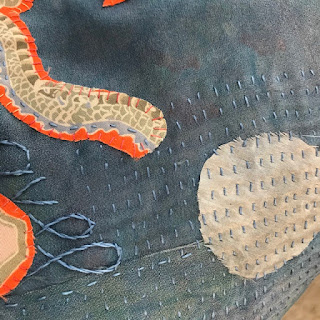 The blue is a kimono silk from stash, as is the eco-printed cotton sateen. You may be able to see the prints from my Japanese maple tree leaves in the picture. The print was mostly lost though. I liked the color of the piece and was not really interested in highlighting the leaf prints. 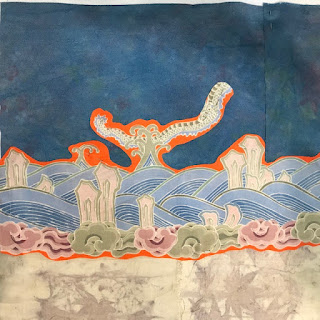 I did some tests and decided it would be necessary to fuse the large orange piece to light weight interfacing. It worked great and was much easier to cut and manipulate. The interfacing made it easy to fussy-cut part of the orange print. I left it raw-edged. 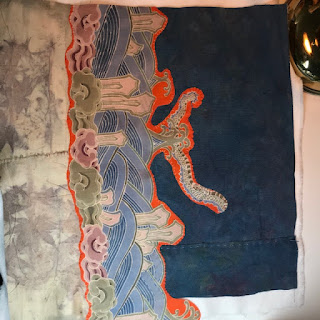 Now I have finished and delivered it. I used something of everything they sent. It is titled Ravel, Then Unravel. 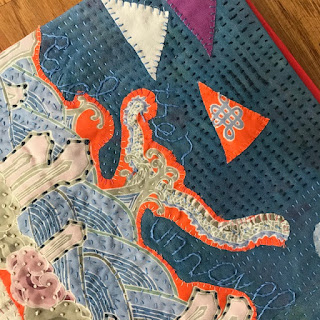 Of course, I covered it in hand-stitch. I love doing that. It is so very calming and satisfying to me. I was able to use some of the techniques I learned recently in a class with Ekta Kaul on kantha stitch. More about that later. 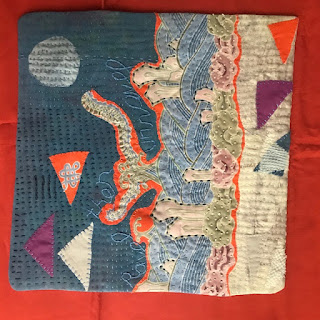 I auditioned color for the frame of my 12x12 canvas by photographing the finished piece on dark blue, and then trying it out on bright orange. Bright orange was the winner. 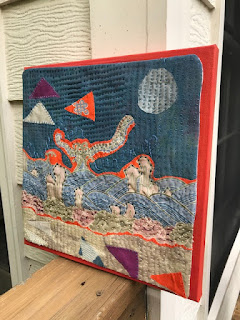 But I like it better viewed like this. So that is the way the hardware is attached to the back of the canvas. 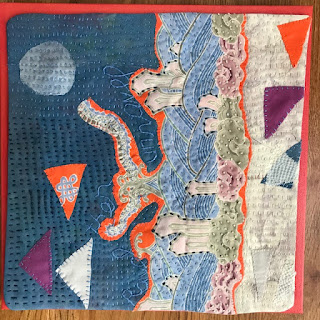 Because I volunteered to use SEFAA's donated kimono pieces, I was allowed to enter two pieces. Here is my other piece: 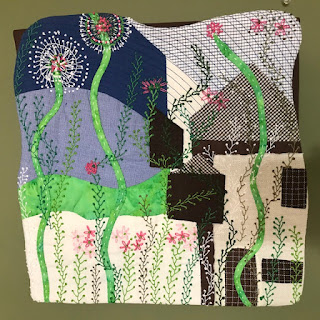 Grandmother's House was constructed from an old soft cotton pillow case my grandmother embroidered decades ago. I have a number of these and finally decided it was time to stop using them as pillow cases! They are so soft and tempting but becoming quite fragile. 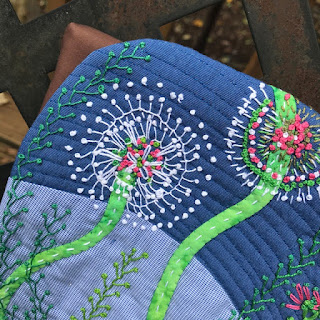 Grandmother, like me, needed to stitch by hand. Maybe it's genetic. She was in an old folks home at the end and bored, so she stitched on pillow case blanks. I suspect I'm not the only grandchild with a few of these. I love them not just because she stitched them, but because I can tell when she began to go. Her stitching starts out crisp, sweet daisies with petals and leaves. At the end, it's a jumble of stitches. I like that one just as much as the earlier ones. Maybe more. 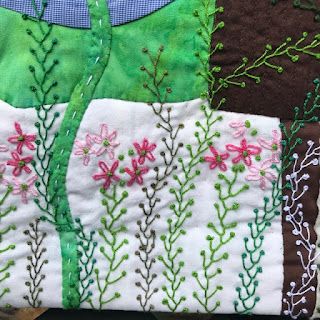 I took a piece of one pillow case and added other fabrics. Then, following her lead, I began to practice the feather stitch all over the piece. Now I am crazy about the feather stitch, especially with French knots added to the tips. 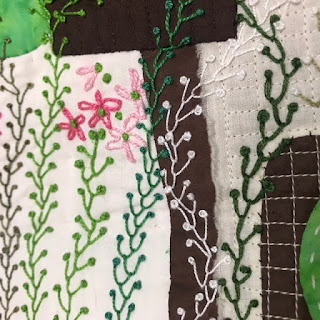 It is a vague memory of Grandmother's house. Granddad bought it in the 30's because it was walking distance to Texas Tech University (not a university then, I'm sure). He wanted his kids to go to college. Grandmother and Granddad were divorced and he lived in another tiny house across town. I thought that all grandparents lived separately.

It has since been bull-dozed and replaced by condo's and apartments. Too bad. I would love to see it again. There was a little house in the back that she rented out for *pocket* money.

Oh, my, I am getting old, aren't I? Actually this is the best time in my life, doing things I love. I just finished a 2 day hike with my daughter and granddaughter. 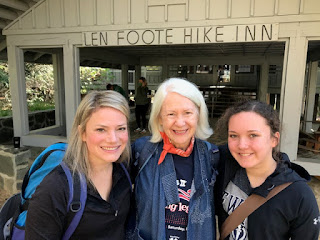 And here's the new, old me, wrinkles and all! 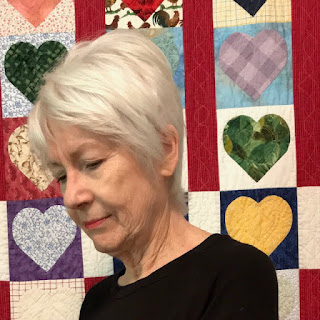